Photographs from the Isaiah Rice Photograph Collection at UNC Asheville 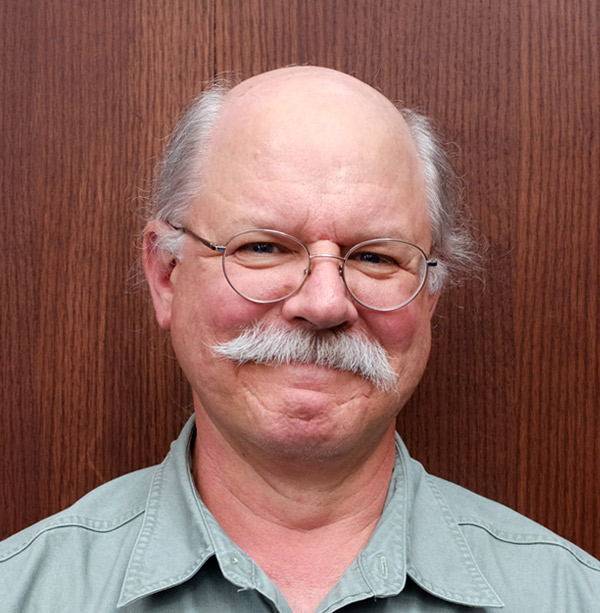 Isaiah Rice (1917–1980) was born in Asheville, North Carolina, to Theodore and Alberta Rice. A loving family man of deep faith, conviction, and responsibility, he married Asheville native Jeroline Bradley Rice in 1942, and they had one daughter, Marian Waters. He was educated at Stephens-Lee High School and made the best of opportunities available to him, including working for the Works Progress Administration (WPA) during the Great Depression. Rice was drafted into the U.S. Army, and worked as a beverage deliveryman for a local distributor until his death in 1980.

To view this online exhibit, click on the arrows to at the side of the image to go to the next image. 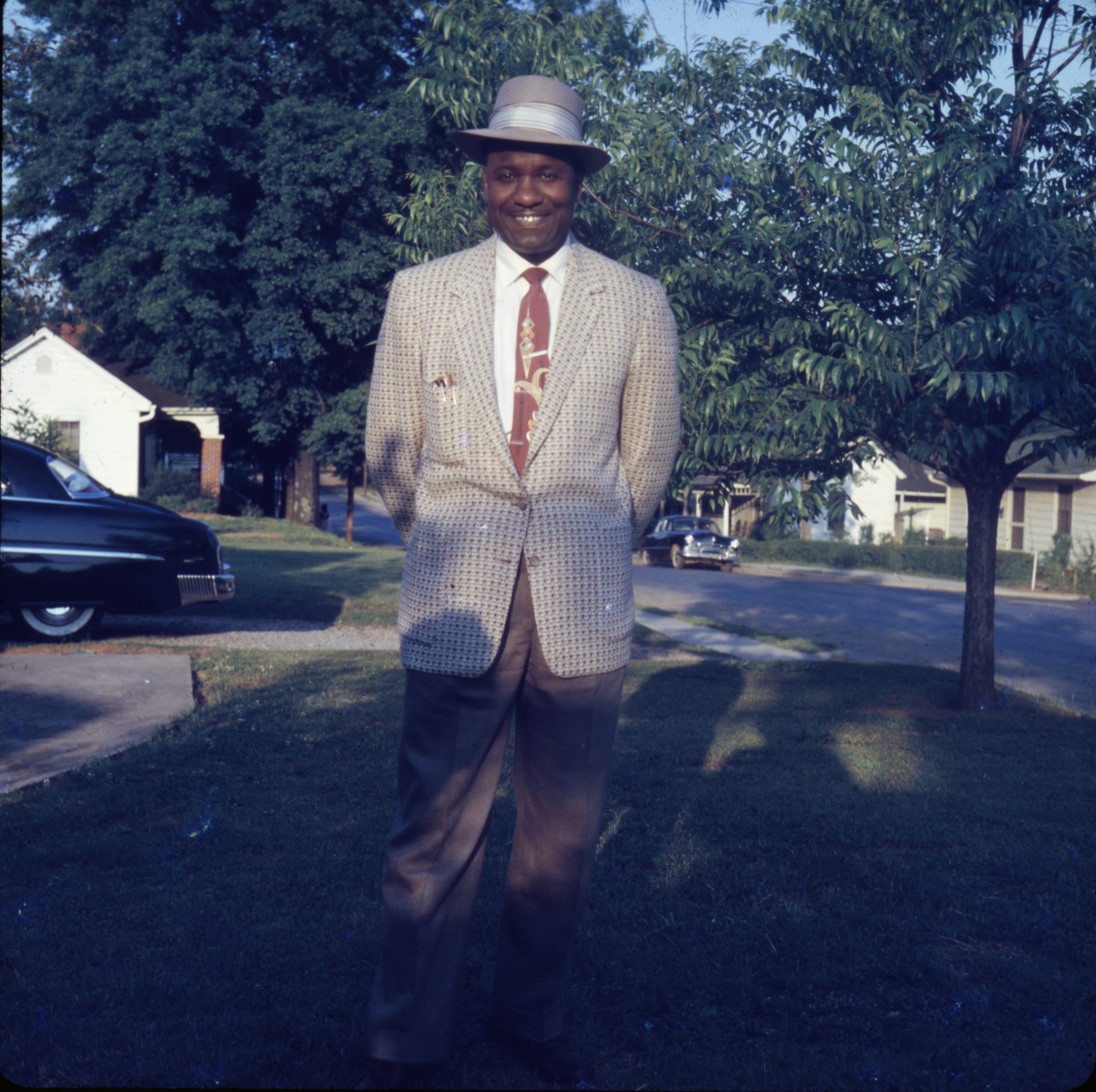 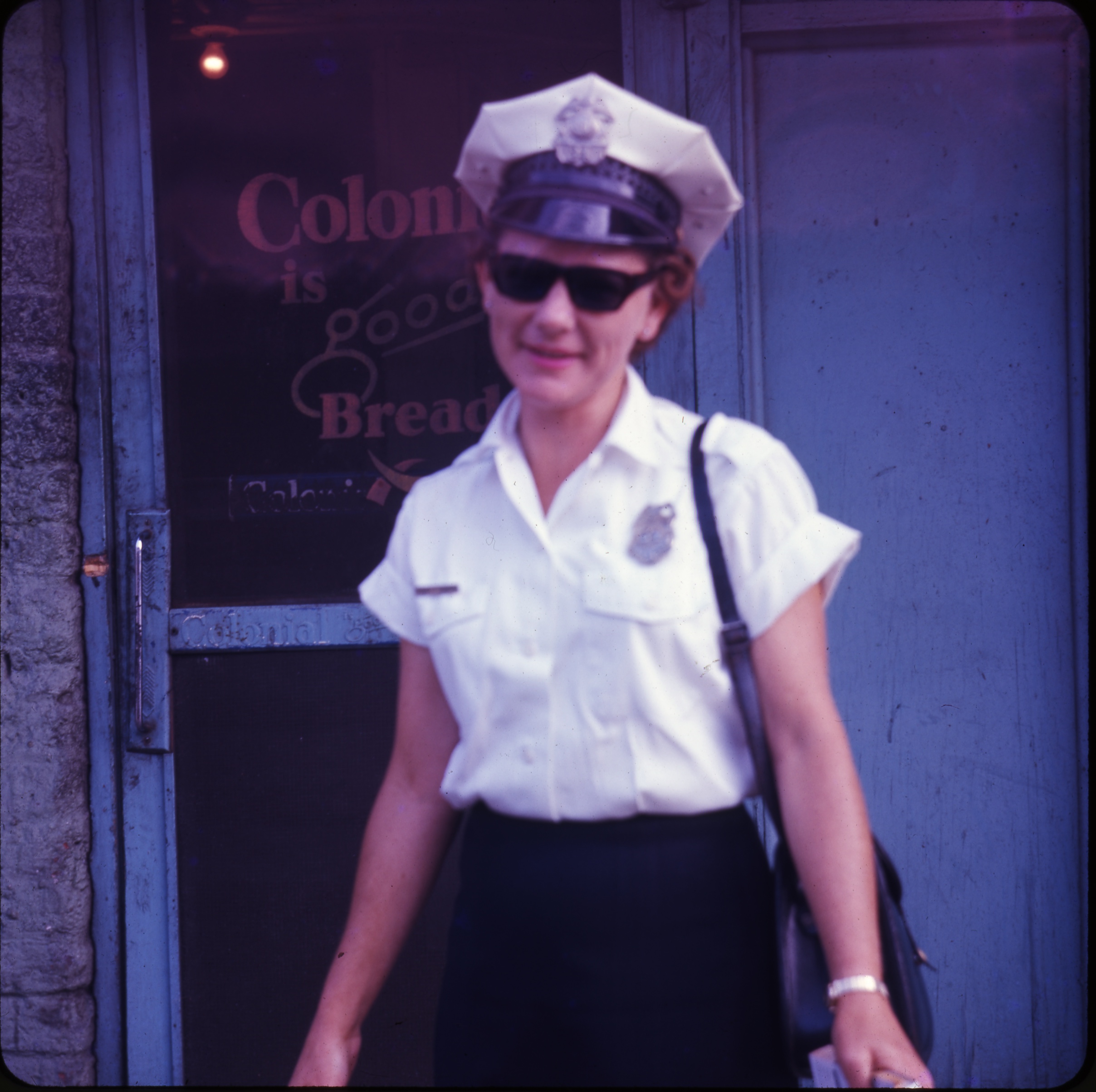 In his job as a beverage delivery driver, Isaiah Rice worked in downtown Asheville on a regular basis. As a driver he probably knew a number of the officers who monitored parking and parking meters -- known as "meter maids." His collection includes several photos of meter maids. 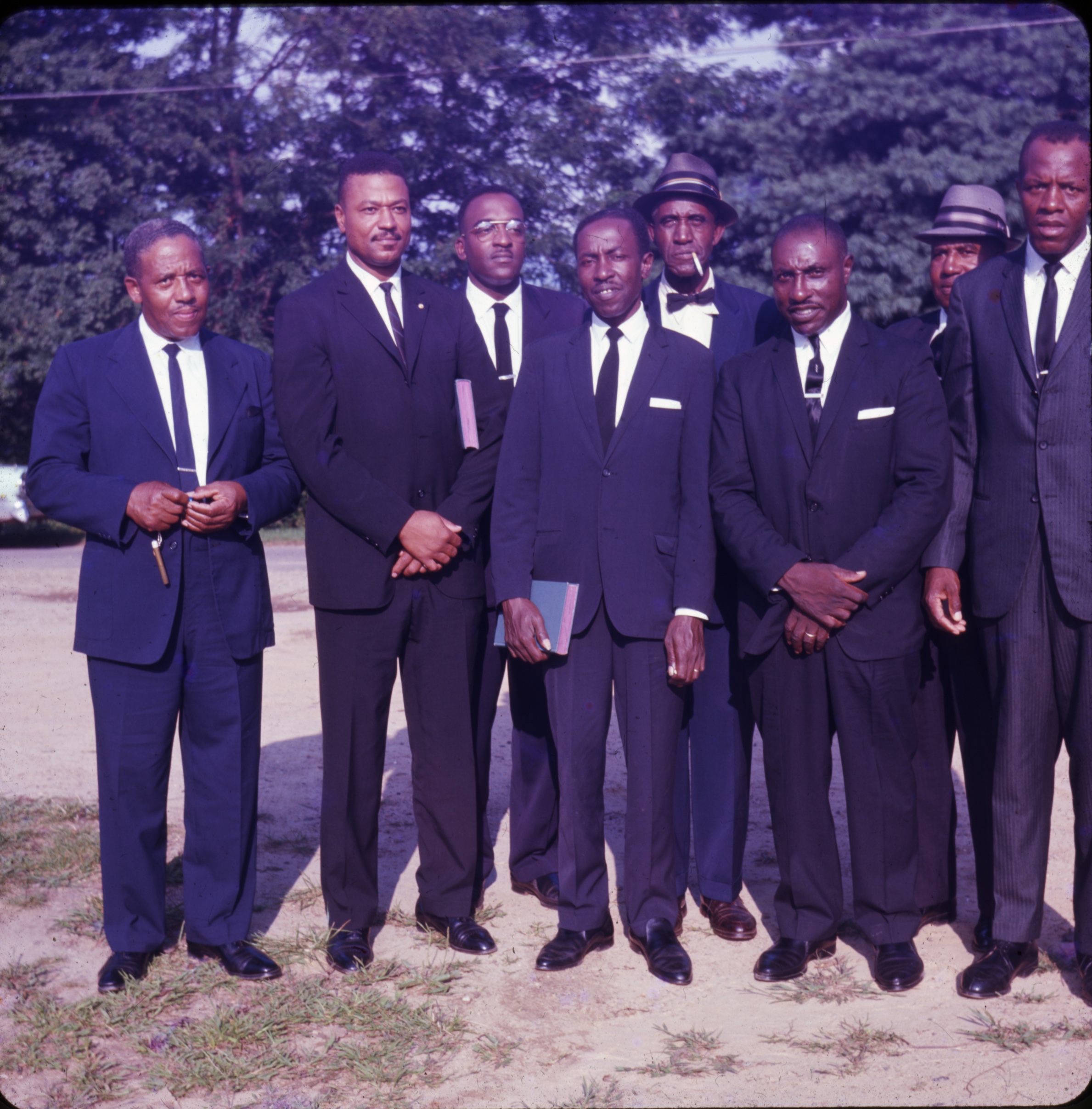 Isaiah RIce was very active in his church, and took this photo of the church deacons. 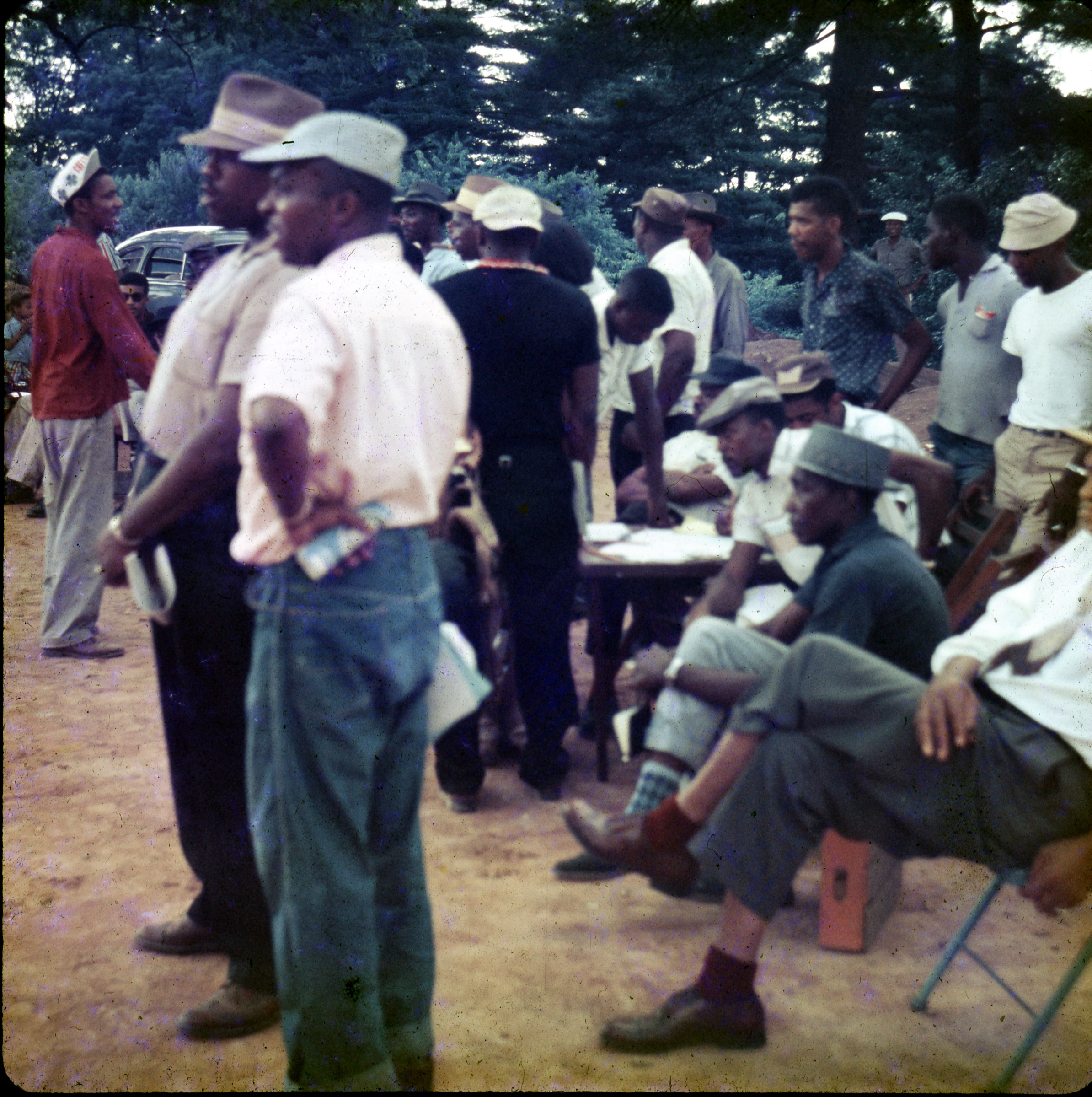 Rice was rarely without a camera, and he took this photo of men watching a baseball game. 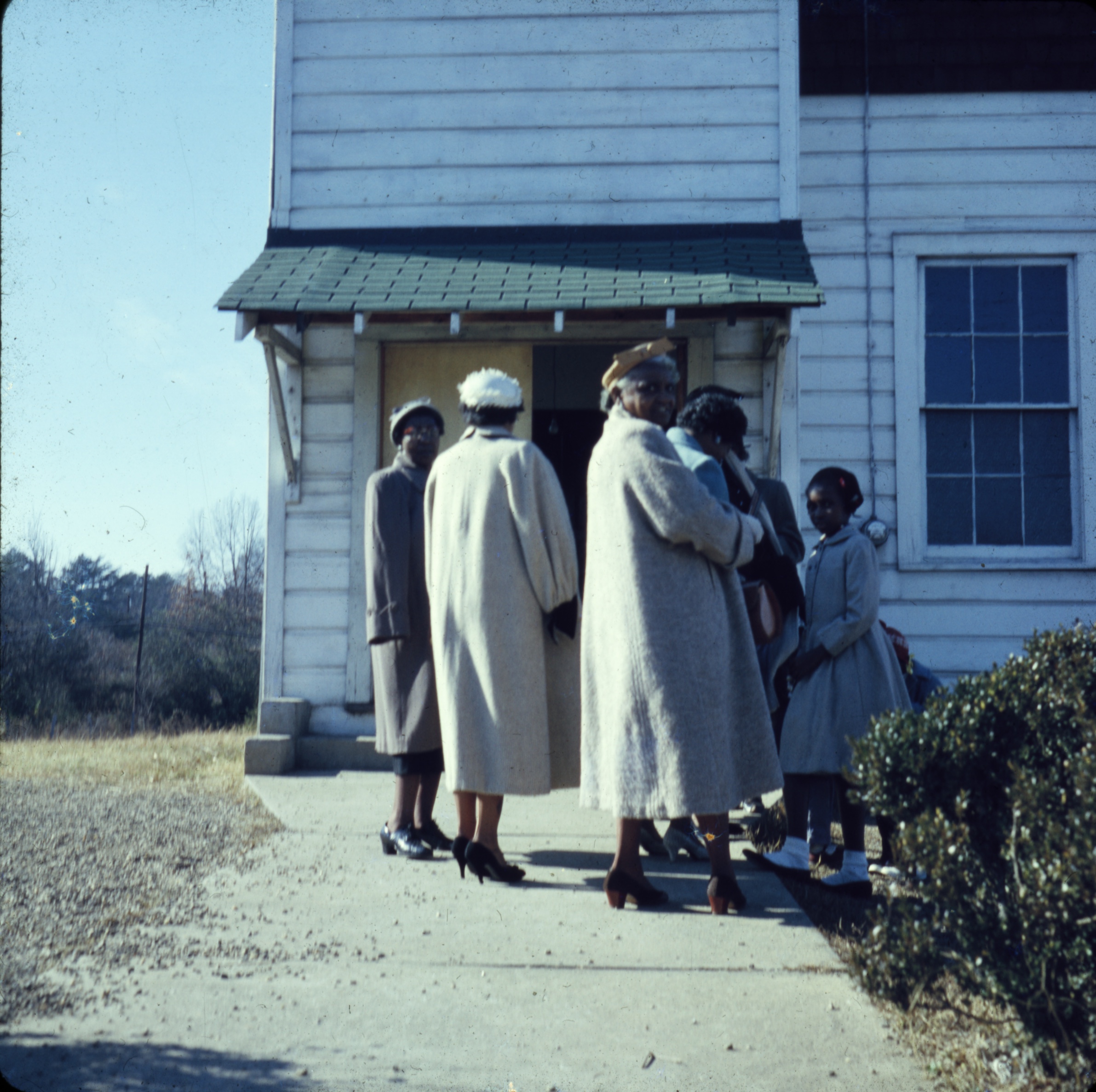 Women and girls gathering outside

Rice took photos of his neighbors as they went about their daily lives, as this photo of women and girls gathering outside. 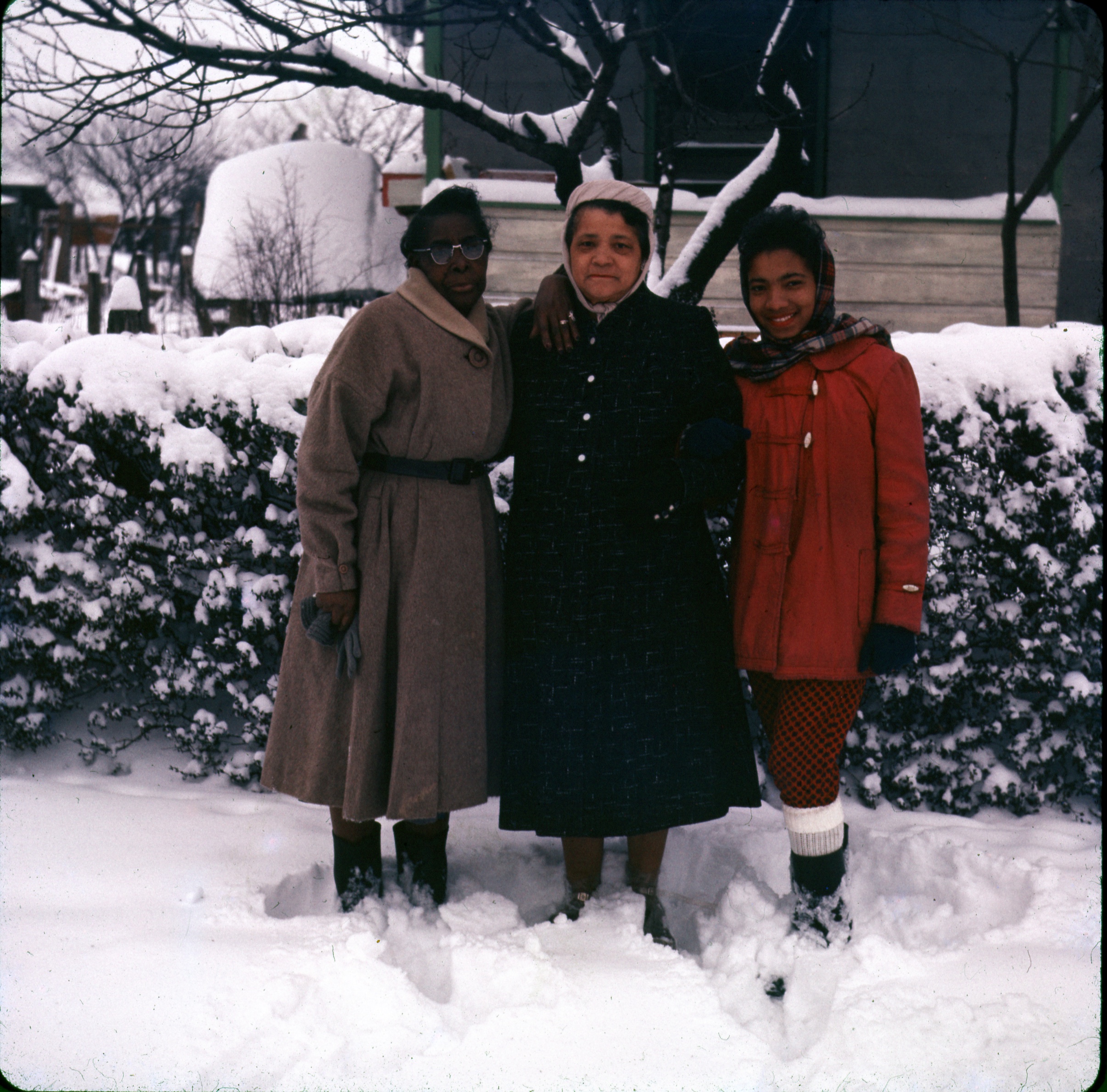 Three women in the snow

Several generations of women in the snow. A photo that was probably taken in Isaiah Rice's Burton Street community. 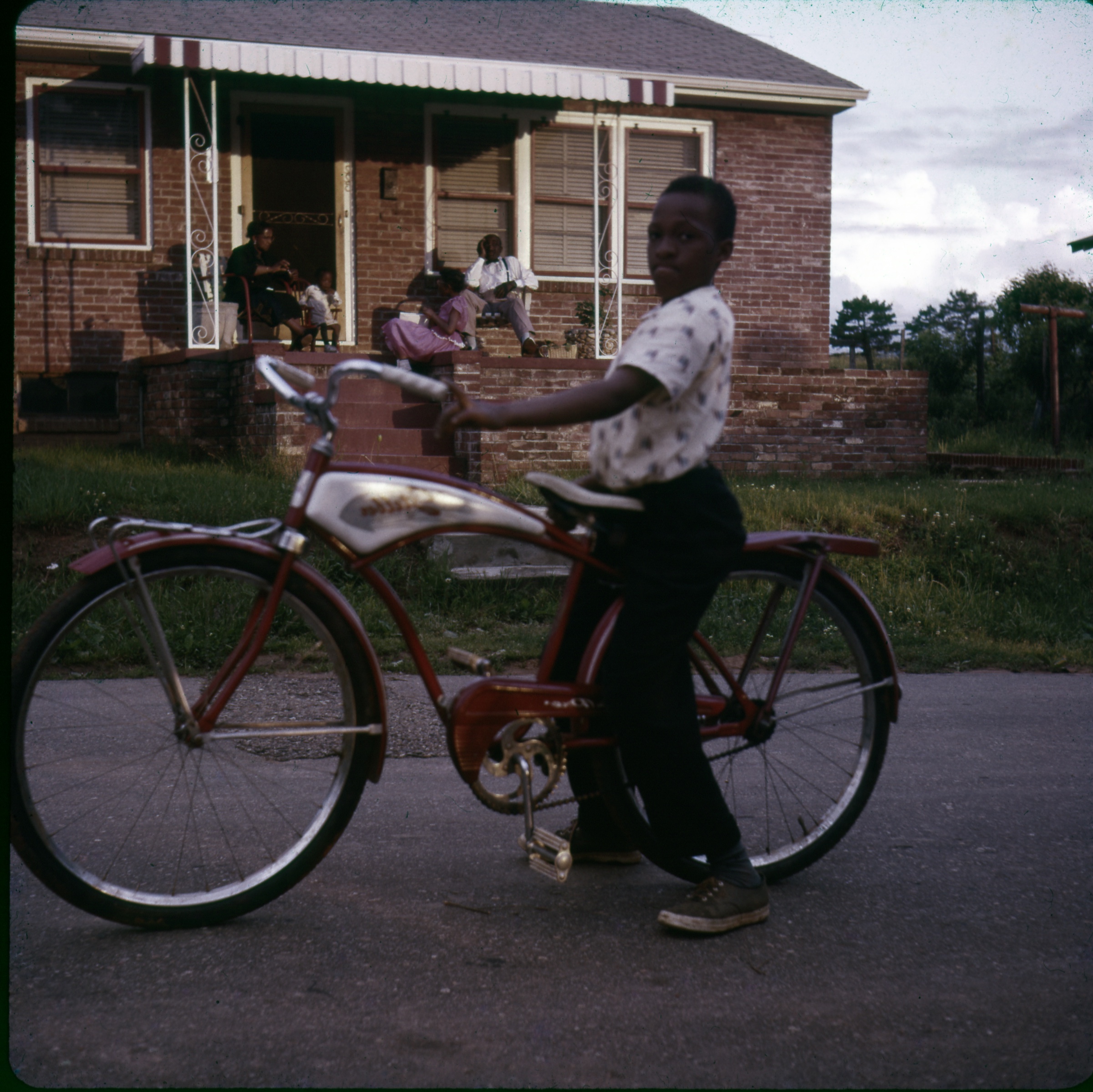 Boy with bicycle and family on front porch

This is another photo that was probably taken in Rice's Burton Street community, capturing a boy and his bike and a family on their front porch. 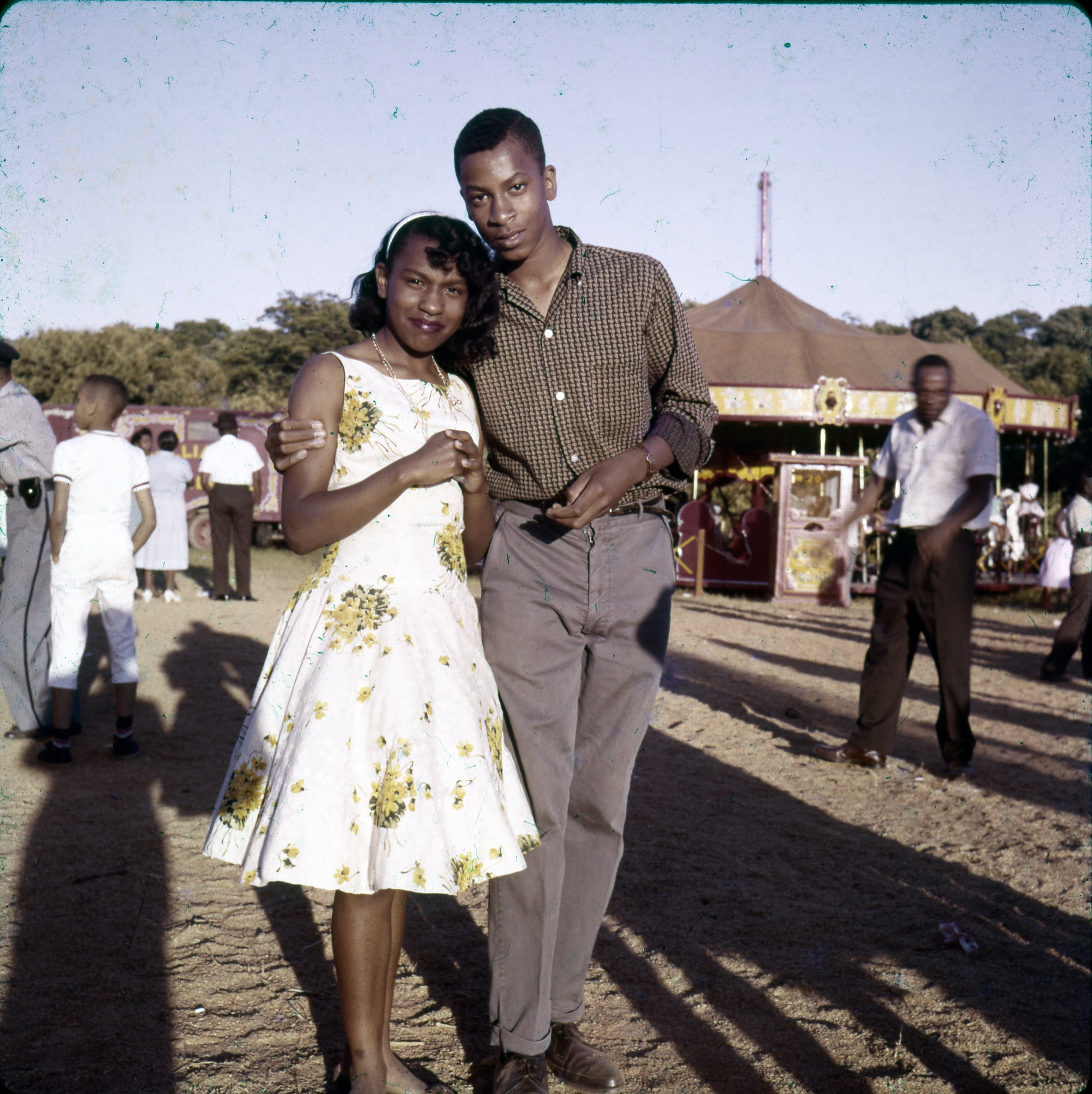 A couple at the fair

A couple at the fair. 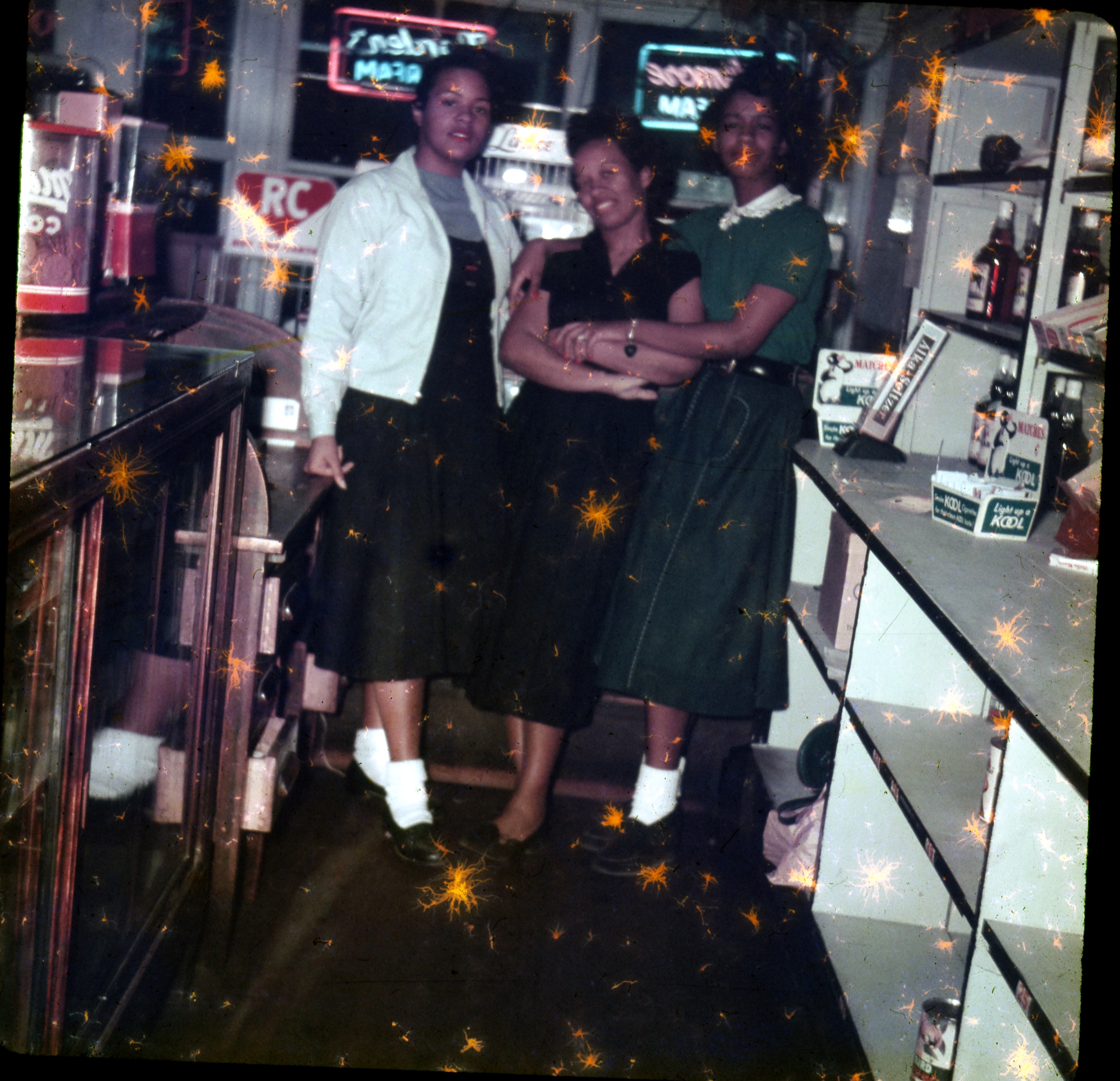 Three women in a store

Many of Rice's photos were taken downtown and in various stores around Asheville, where he delivered beverages. This was taken using slide film and the bright orange spots show that the slide is deteriorating. 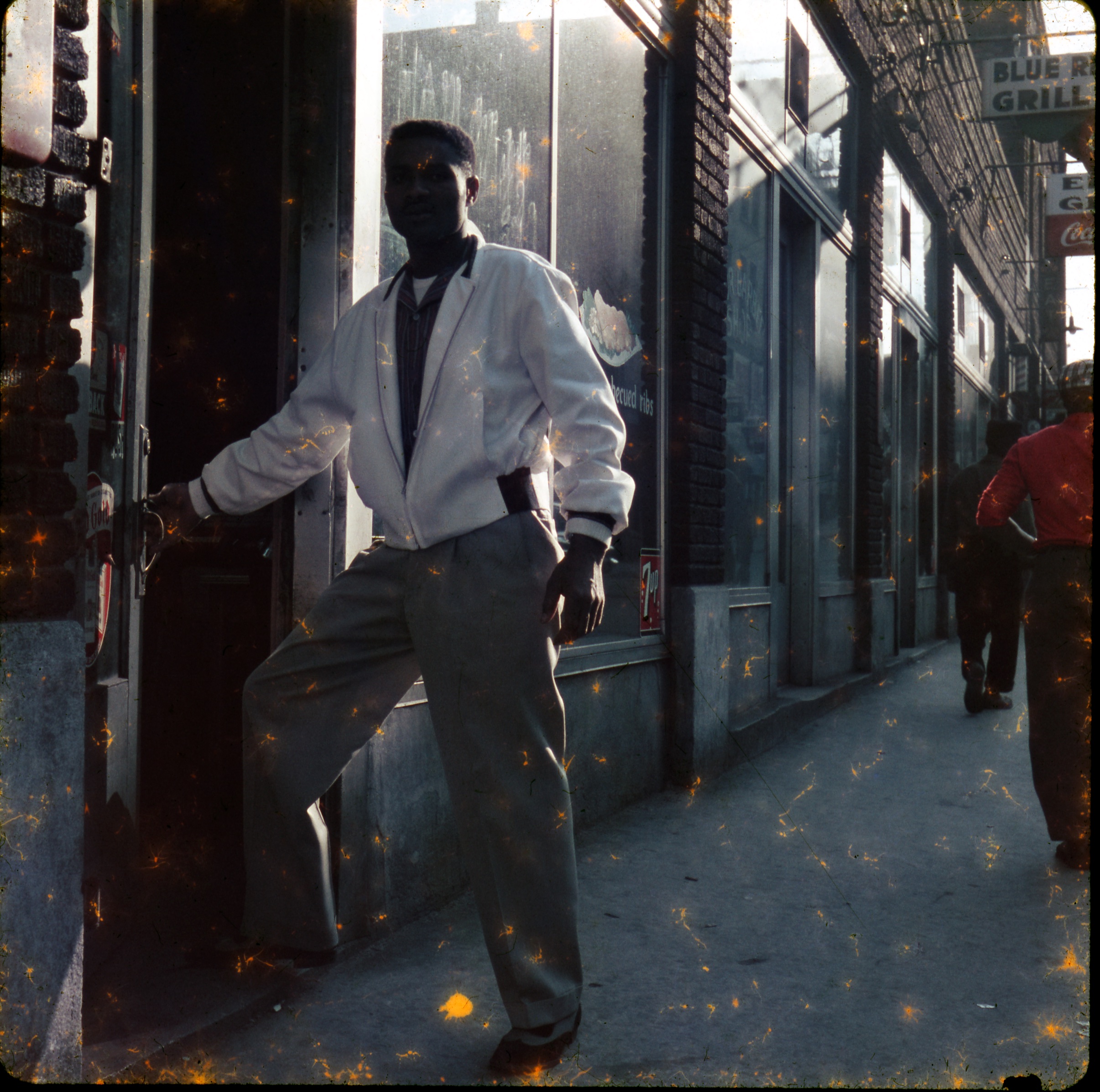 Man entering store on the Block

The area around Market and Eagle streets in downtown Asheville - known as "The Block" - was a thriving African American business district. This photo captures a man entering a store in the Block. 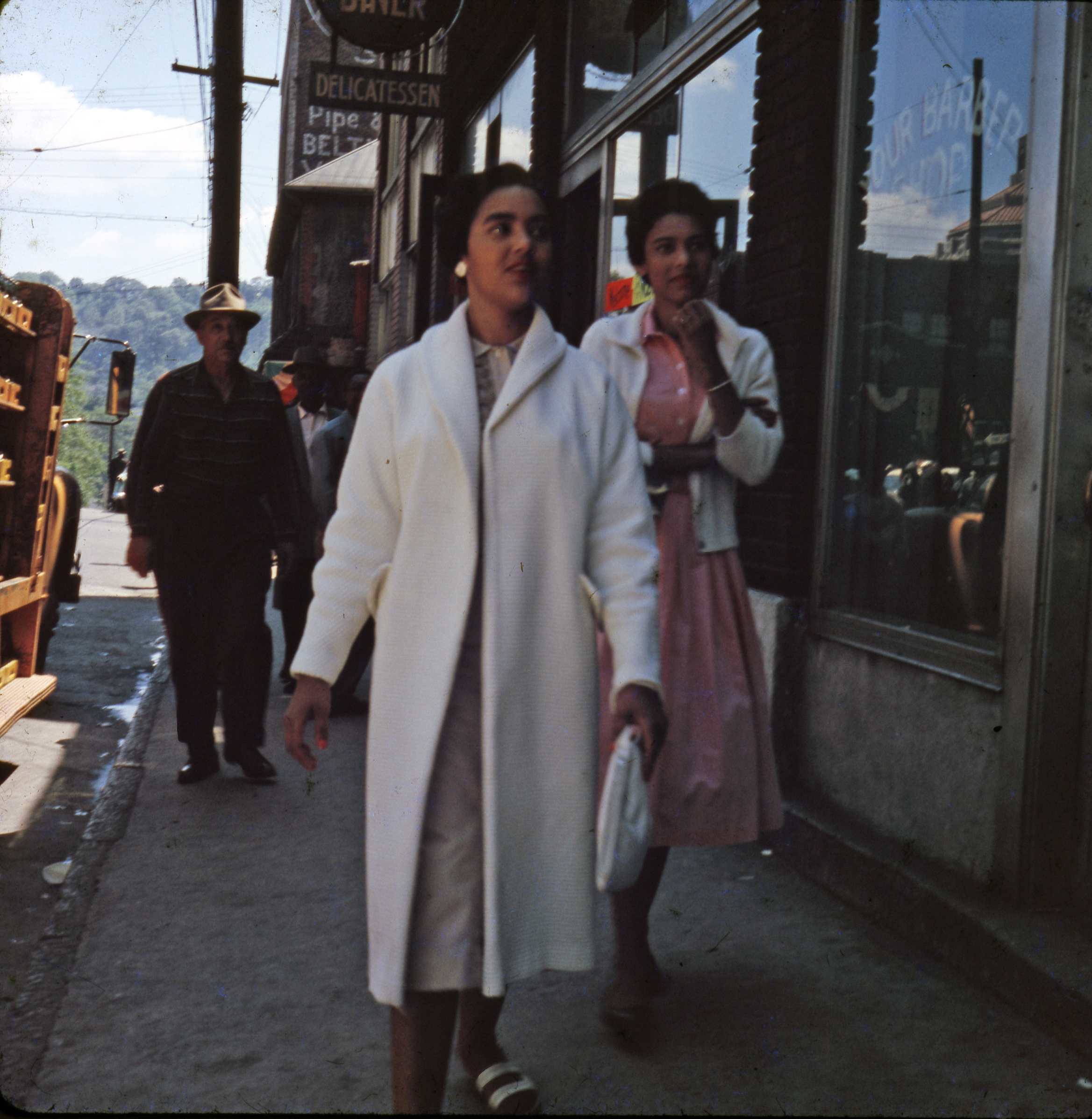 Busy sidewalk on the Block 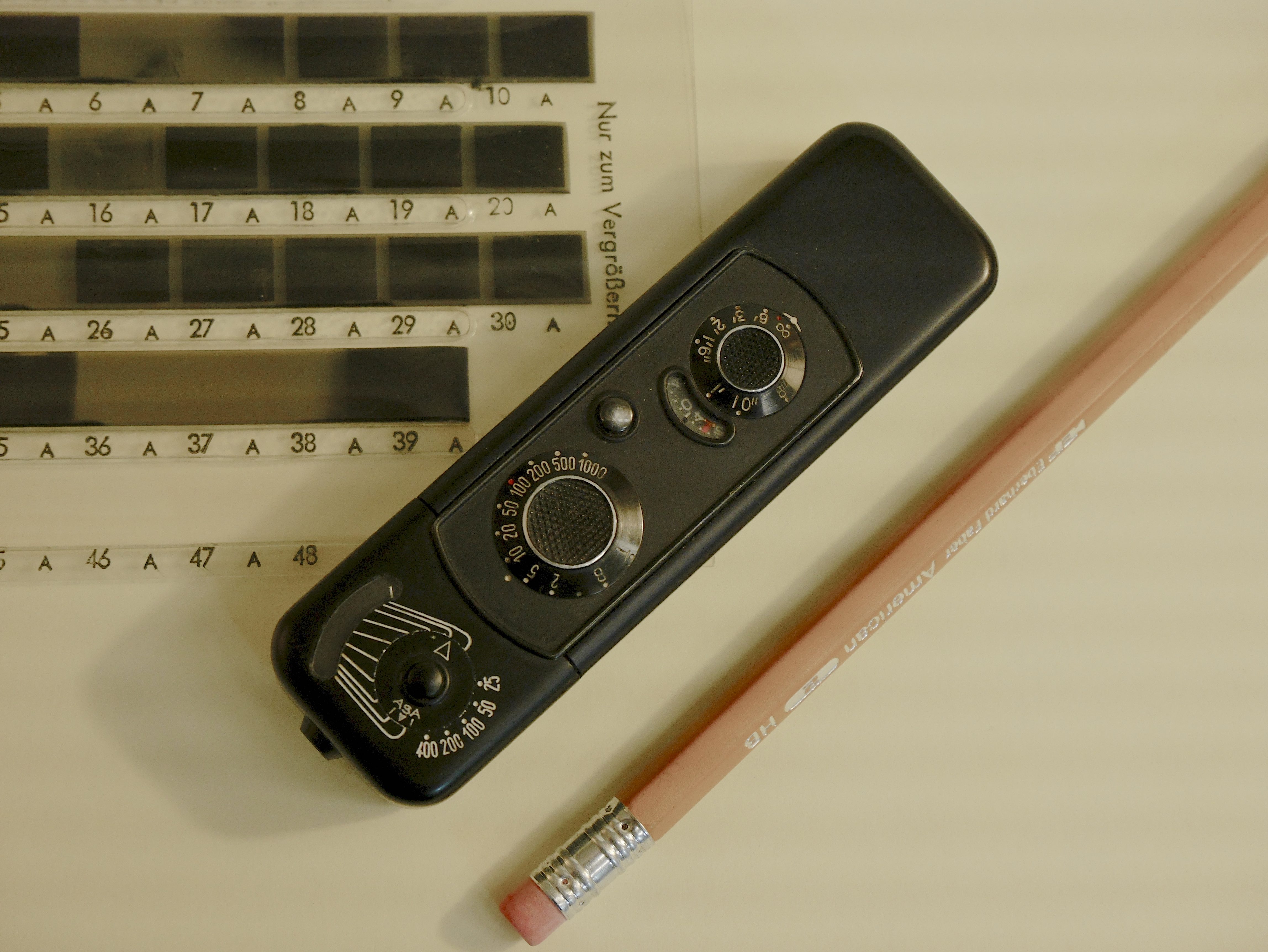 Perhaps the most intriguing camera was his Minox-B subminiature “spy” camera, which was produced from 1958–69 and cost around $160 in 1969. It is approximately 3 ¾” x 1″ x ½”—about the size of a pack of gum—and the negatives were a tiny 8mm x 11mm. Its diminutive size made it perfect to carry in a pocket or small pouch, and made it easy to take photos without drawing attention to the photographer. We aren’t sure where he got his Minox film developed, but the negatives are in sleeves labeled in German.

Adjusted to today’s prices, Rice paid the equivalent of nearly $3,000 for all his cameras, suggesting that he was very serious about his avocation. 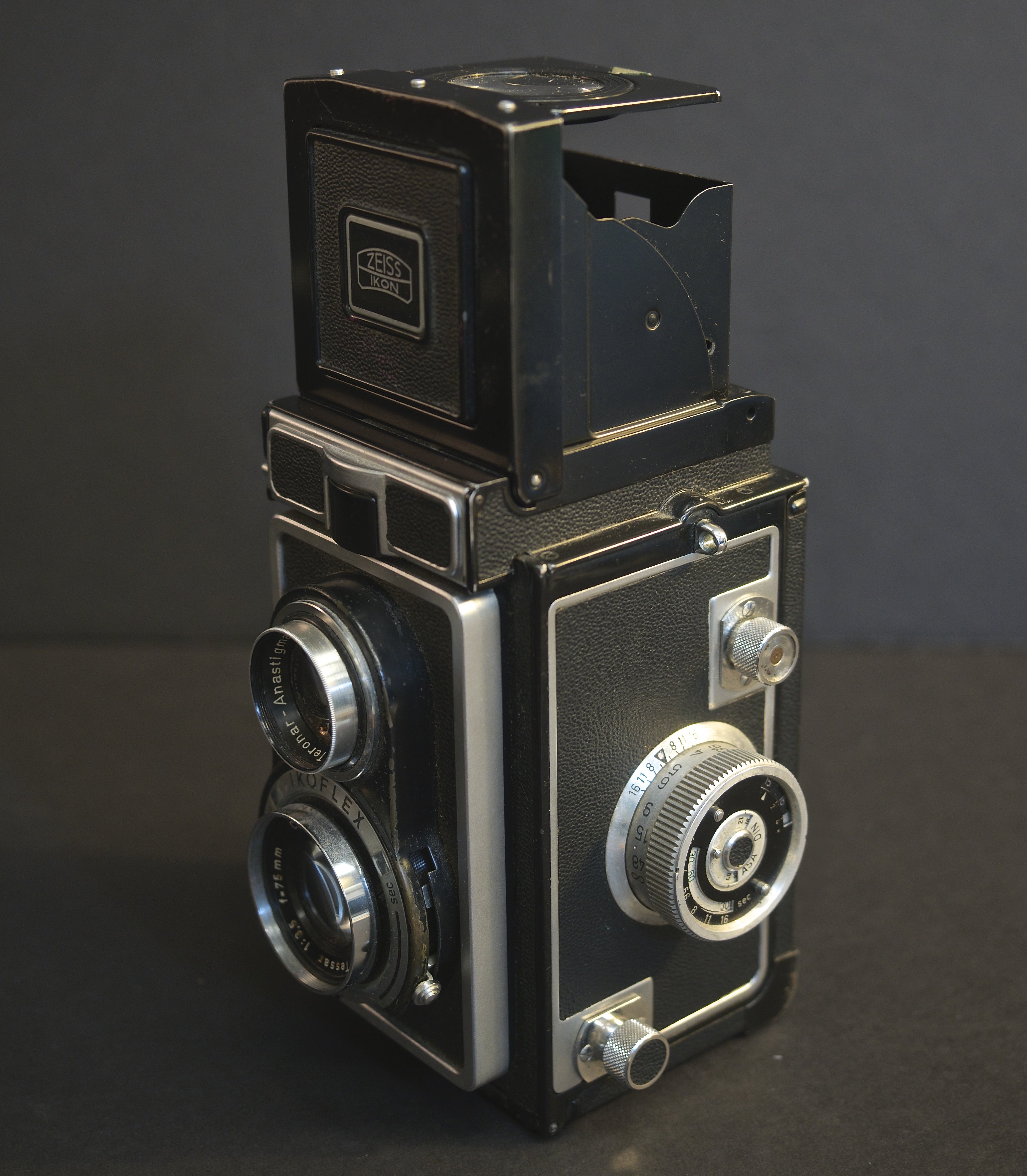 The depth of Rice’s passion for photography is evidenced in his choice of camera equipment and a body of work totaling over 1,400 prints, slides, and negatives. We have no knowledge that he was professionally trained, but we do know that there were photography magazines around his house.

In an era of Brownie instamatics, Rice owned several cameras and favored German cameras produced in the 1950s and 1960s. He took slides and prints with a Zeiss/Ikon Ikoflex Ic 886/16, a twin lens reflex camera that was produced from 1956 to 1960 and cost $146 when it was first introduced. Rice also owned an Ansco Speedex 4.5 (which retailed for about $47 in 1955), a Kodak Duaflex, and a Polaroid camera. 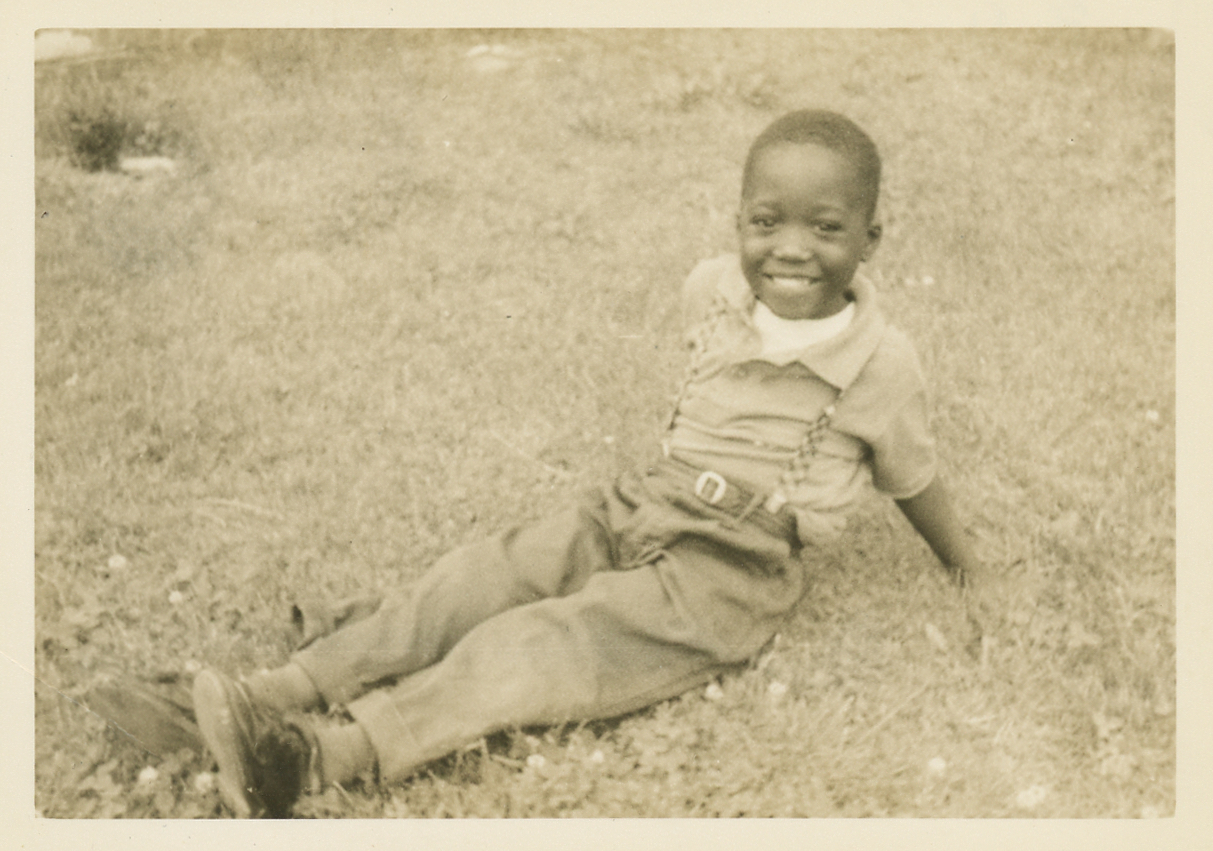 Boy in the grass

He loved to take photos of children in his community. While Rice may not have thought himself an artist, his way of seeing reveals a style that is self-aware and serious, connected to his community, while at the same time playful and direct, even when he was “secretly” taking pictures in plain sight. There is clear excitement, even a sense of freedom, in Rice’s photography—and a palpable joy in image-making. 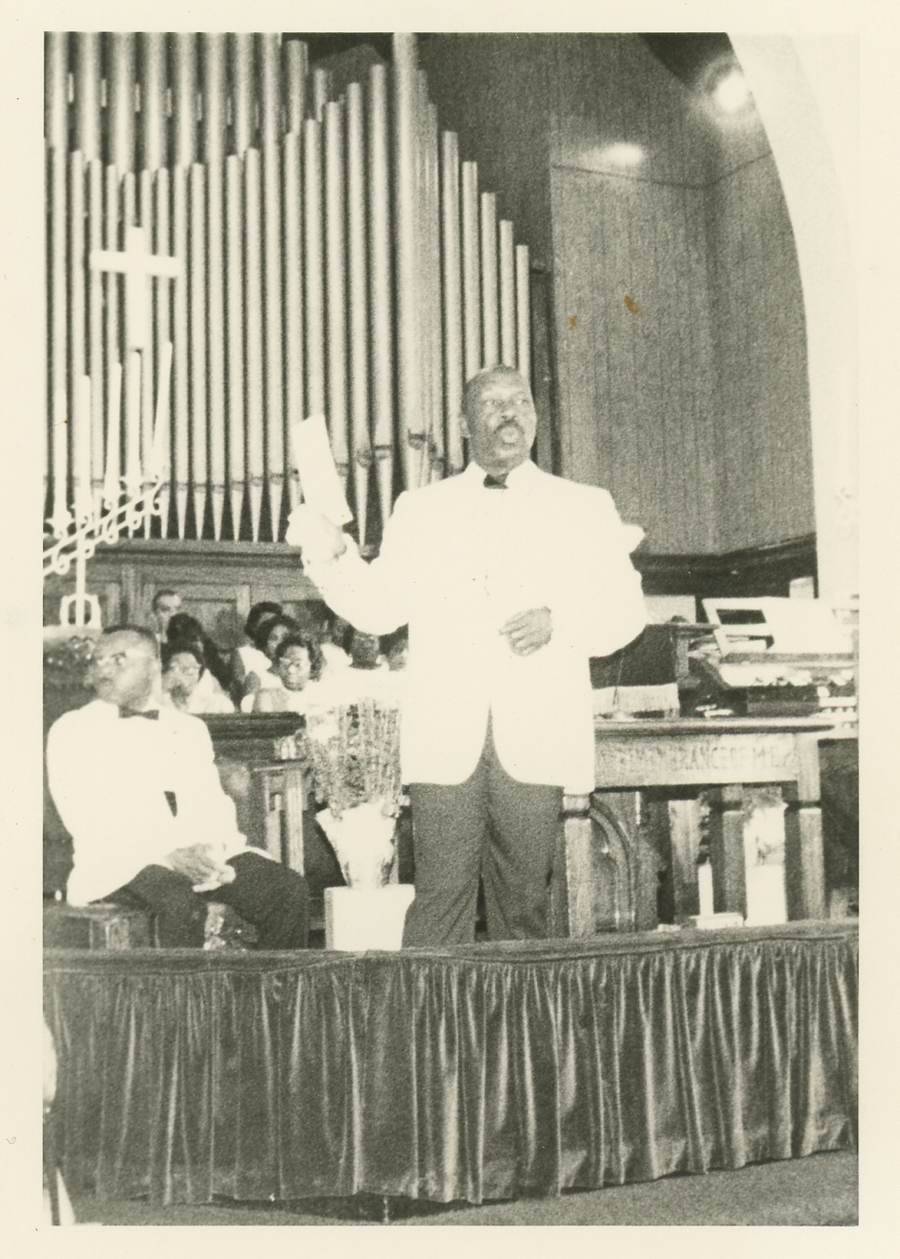 Rice took what amounted to formal and informal photos of his church. He was a deacon and very involved in his church. This photo was taken with his Minox and captures the preacher in action. 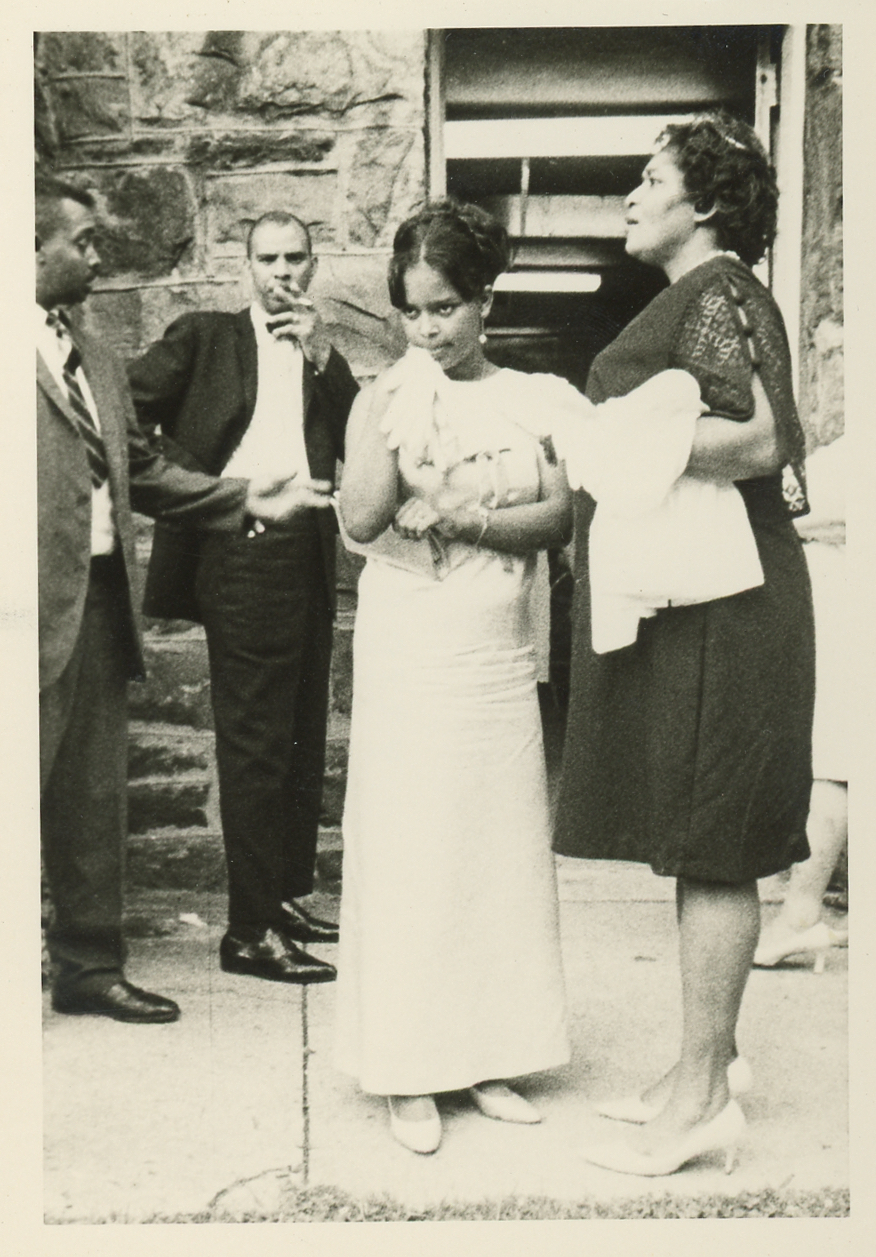 Another photo taken with Rice's Minox "spy" camera, capturing the various moods of these people standing outside at what looks like a wedding. 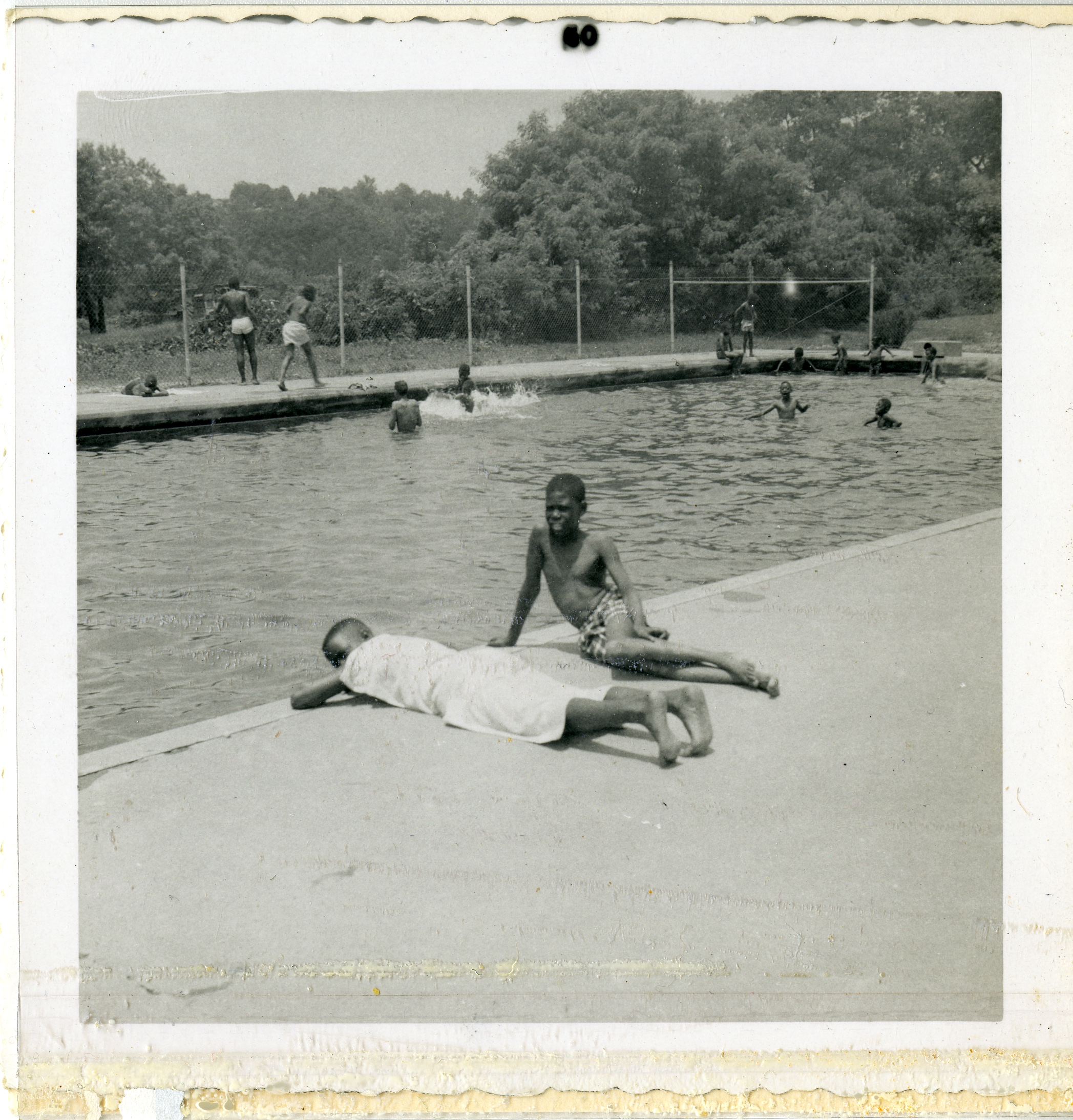 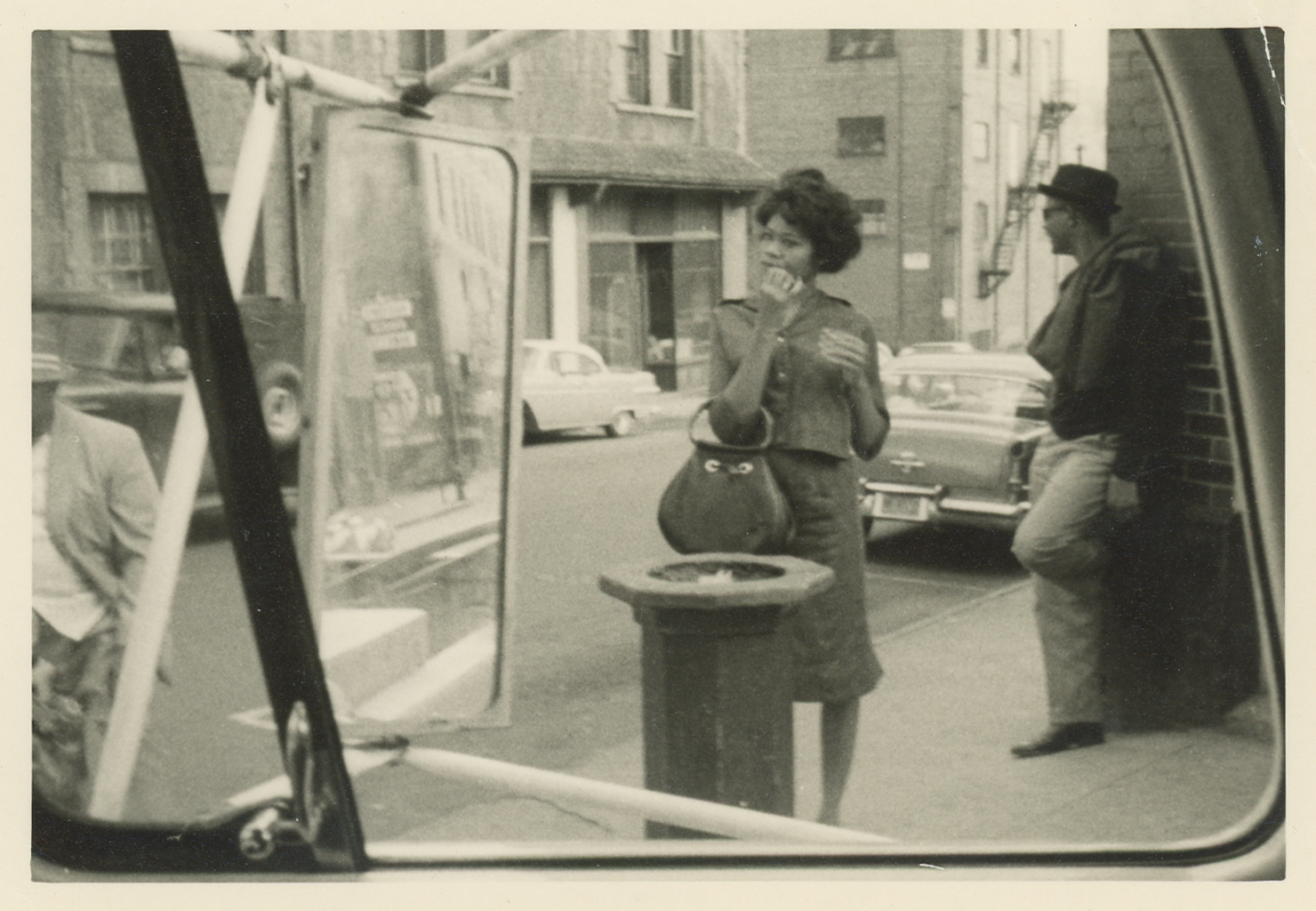 As the “camera man,” Rice was constantly capturing normal moments in the life of the African American community. This photo was taken with his Minox camera from the window of his delivery truck - there are many such "drive by" photos in the Rice Collection, where he would pre-set the camera settings on his Minox camera and take quick snapshots out his truck window.

As an “insider” in this community, and as one known to have a camera, often times he was able to document his community candidly and honestly. 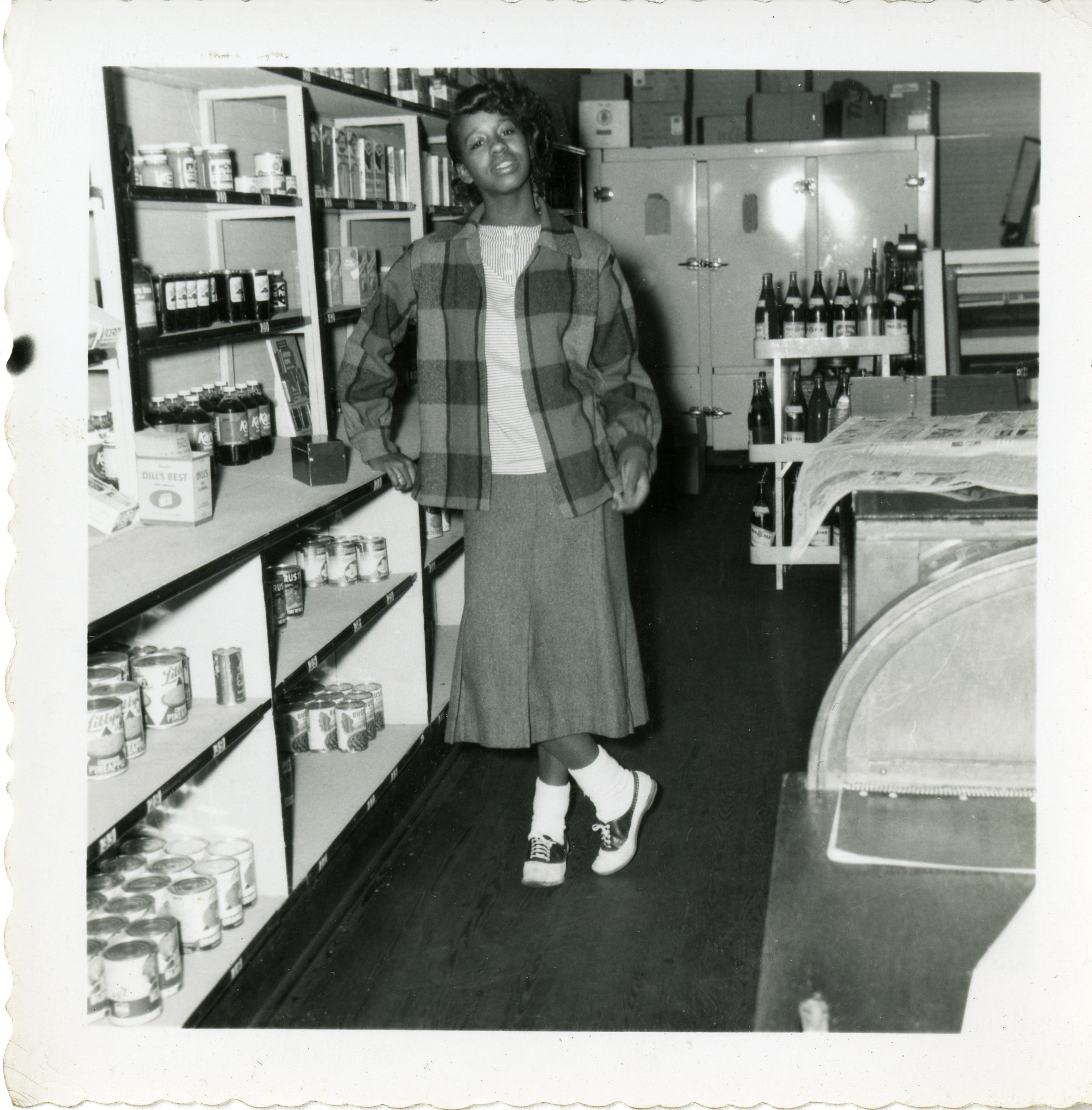 Known as the “camera man,” Rice was constantly capturing normal moments in the life of the African American community. As a delivery driver, he was inside of segregated businesses, both white and African American. 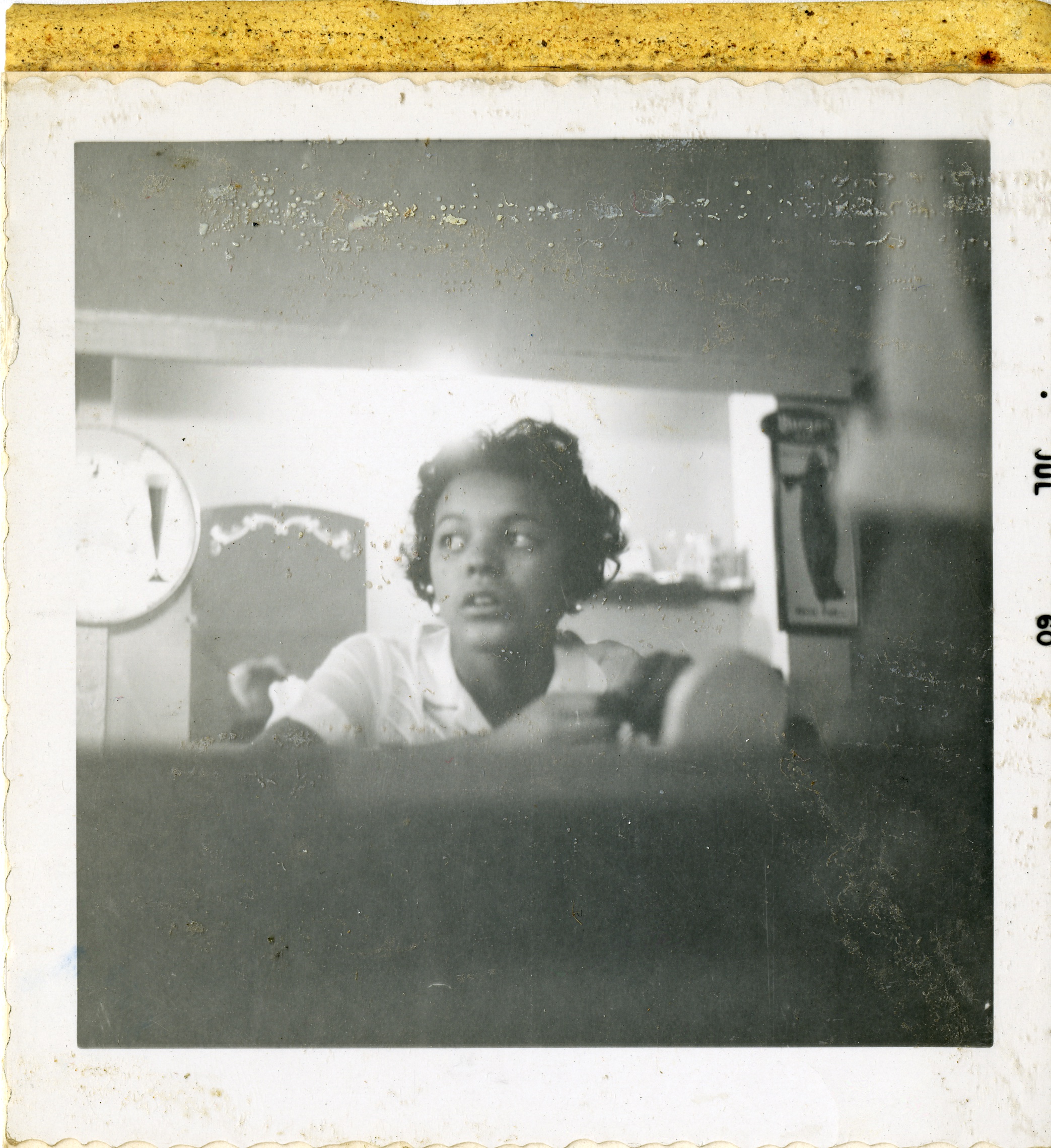 This photo was probably taken while Rice was working, capturing this at work woman behind a counter 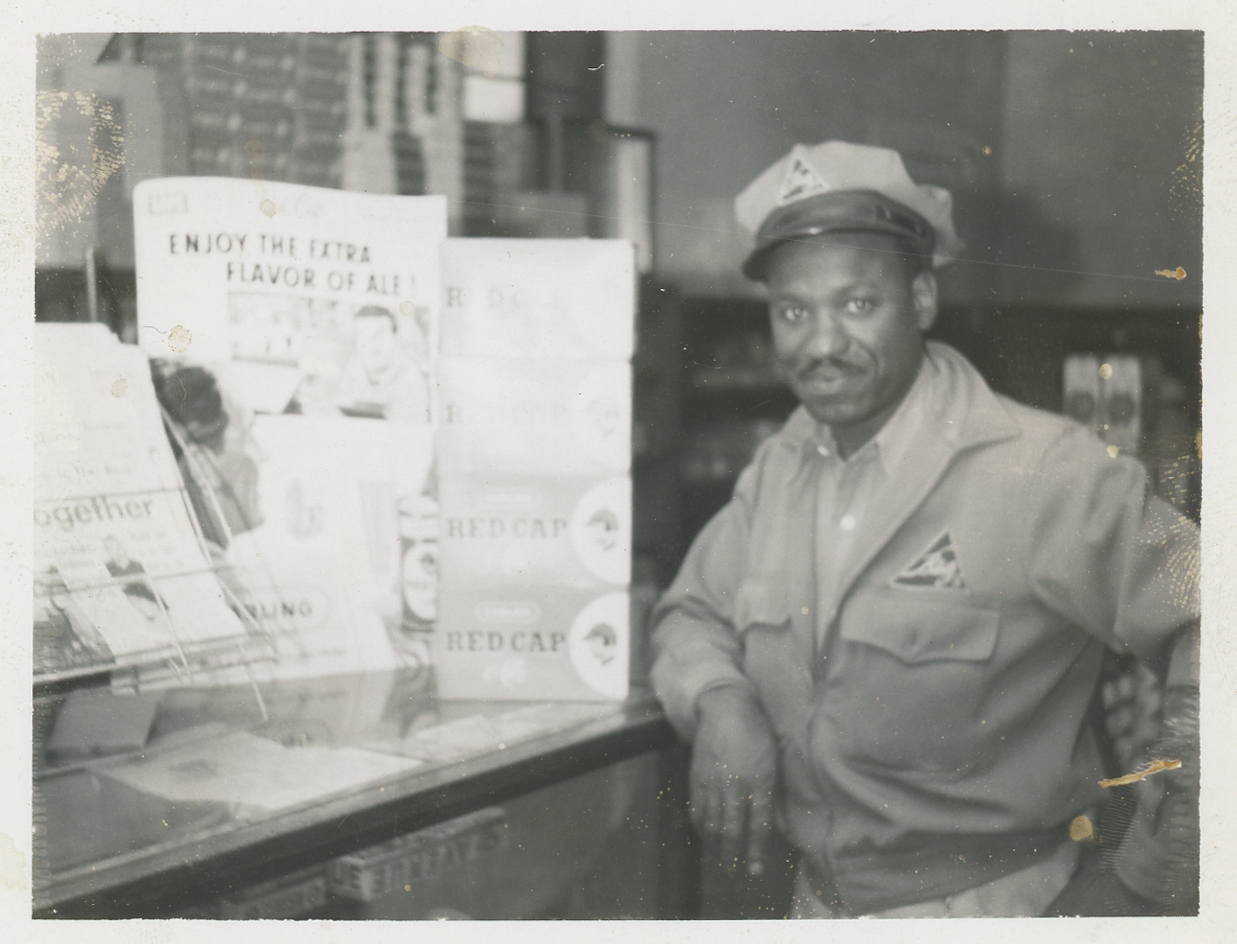