A guide to primary source accounts of life under slavery. 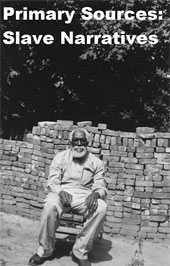 Use the following Subject Headings in the library catalog to find out what slave narratives are available in the Western North Carolina Library Network:

Primary sources of slaves and ex-slaves may include diaries, letters, interviews, transcribed songs, and even recorded folklore.

Keyword searches using these words may yield additional books, recordings, and materials. For example: "African Americans and slave and interviews"

WPA Interviews of the 1930s

Born in Slavery: Slave Narratives from the Federal Writers' Project, 1936-1938. A joint presentation of the Manuscript and Prints and Photographs Divisions of the Library of Congress. Washington, D.C.: Library of Congress, [2000?]
Presents more than 2,300 first-person accounts of slavery and 500 black-and-white photographs of former slaves. Provides links from individual photographs to the corresponding narratives. Collected in the 1930s as part of the Federal Writers' Project of the Works Progress Administration (WPA), the narratives were assembled and microfilmed in 1941 as the seventeen-volume work entitled Slave narratives: a folk history of slavery in the United States, from interviews with former slaves.

American Slavery: A Composite Autobiography. Ed. George P. Rawick, et al. Westport, Conn.: Greenwood Publishing Group, 2000.
(UNCA users only)
Contains the collection of over 2,000 interviews conducted in seventeen states between 1936 and 1938 under the Federal Writers' Project of the Work Progress Administration, as published in 1972 in The American Slave: A Composite Autobiography edited by George P. Rawick. The site contains a links to the narratives and Rawick's analysis of the collection, From Sundown to Sunup: The Making of the Black Community. Each entry links to an Adobe PDF version of the narrative as contained in the Rawick print collection, including any handwritten editorial comments made at the time.

Museum of the African Diaspora.
Dramatized recordings of slave narratives.

Voices from the Days of Slavery: Former Slaves Tell Their Stories. From the American Folklife Center, Library of Congress. Washington, D.C.: Library of Congress, [2004?]
Provides the opportunity to listen to former slaves describe their lives. These interviews, conducted between 1932 and 1975, capture the recollections of twenty-three identifiable people born between 1823 and the early 1860s and known to have been former slaves. Several of the people interviewed were centenarians, the oldest being 130 at the time of the interview.

Some key print collections of slave narrative include the following. You can also browse the shelves in the general collection, concentrating on the E441-E453 call number range on the upper floor of the library.

The Cambridge companion to the African American slave narrative.  (online)

A comprehensive name index for the American slave.  (online)

Documents illustrative of the history of the slave trade to America. UNCA GENERAL  E441 .D69

I was born a slave: the story of Harriet Jacobs.  (online)

The life of John Thompson, a fugitive slave : containing his history of 25 years in bondage, and his providential escape, written by himself.  UNCA GENERAL  E444 .T47

Slave narratives : a folk history of slavery in the United States, from interviews with former slaves.  UNCA GENERAL  E444 .F27